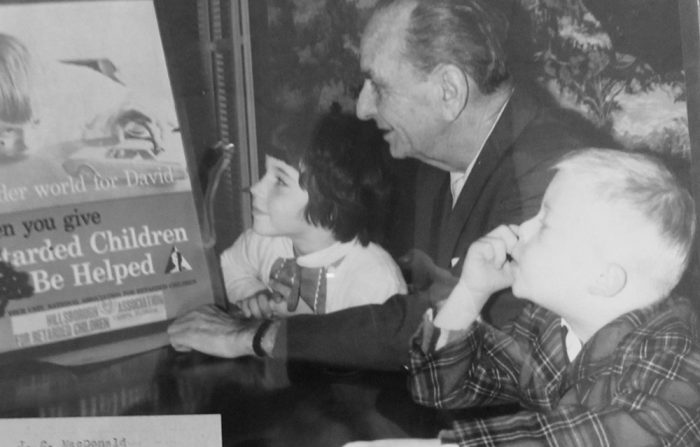 MacDonald Training Center (MTC) was founded in 1953 by
J. Clifford MacDonald and a group of visionary parents
of individuals with disabilities.

At a time when the only alternative to being sent to a state institution was to sit at home and do nothing, these individuals rejected both options and proceeded to create innovative educational, vocational and residential alternatives. Their efforts led to one of the first pre-schools in our nation for children with disabilities. Mr. MacDonald received the Presidential Medal of Freedom in 1964 for his advocacy for people with disabilities including serving as Chair of the National Committee for Vocational Rehabilitation and Employment.

MTC continues to follow in his footsteps as a leader and innovator in educational, vocational, residential and employment services to people with disabilities.

MTC is an organization that envisions “people with disabilities leading the lives they choose.”

We are dedicated to continuously improving the quality of vocational, employment and residential services that we have provided to individuals with disabilities in the Tampa Bay area for over 60 years.

J. Clifford MacDonald
Businessman and philanthropist, he has directed his concern
to the quiet but noble work of enlarging the lives and opportunities of the physically and mentally handicapped.

President Lyndon B. Johnson awarded MacDonald a posthumous Presidential Medal of Freedom with the above citation during White House ceremony December 6, 1963. Mrs. MacDonald received the award for her late husband. MacDonald had been elected as a medal recipient earlier in 1963 by President John F. Kennedy, who was assassinated shortly before the award ceremony.

J. Clifford MacDonald, whose mother was a writer, was born in Alexandria, Virginia, in 1902. After studying journalism at Columbia University, he worked first as a newspaper reporter and then published his own newspaper, The Spectator, in Saint Petersburg, Florida, during the 1920’s. Moving to Tampa in 1926, he started the MacDonald Printing Company there and managed the plant until 1959, when a stroke forced him to retire.

MacDonald began working on behalf of children with disabilities in 1942 after learning his only son was disabled. He founded the Hillsborough Association for Retarded Children in 1953 and, with help from other local groups, opened the MacDonald Training Center in Tampa.

President John F. Kennedy announced MacDonald’s selection for the Medal of Freedom in July 1963, but sadly neither man lived to see the presentation itself. The ailing Floridian died of a stroke just weeks after the announcement, at age sixty-one, and President Kennedy died after being struck by an assassin’s bullet that November.